Climara 50 patches contain oestradiol, an active form of the female hormone oestrogen, released at 50mcg per day, and used to replace the loss of oestrogen at menopause, relieving menopausal symptoms. Climara 50 patches also stimulate the development of female sexual characteristics for male to female transsexuals.

What is Climara used for?

Climara 50 is a transdermal delivery system (skin patch) containing oestrogen that is used as a short-term hormone replacement therapy (HRT) to substitute for a lack of oestrogen production by the ovaries that happens during menopause or following surgical removal of the ovaries.

Climara 50 stimulates the development of female sexual characteristics and is used as part of transgender hormone therapy for male to female transsexuals.

Climara 50 is a skin patch containing the active ingredient oestradiol, the major and the most active form of the female hormone oestrogen. When you apply the patch to your skin, the oestradiol diffuses out of the patch through your skin and into your blood, delivering a dose of 50mcg oestradiol per day. Oestrogen is a steroid hormone produced by the ovaries that binds to specific receptors inside oestrogen-responsive cells and stimulate them to make proteins involved in producing secondary sexual characteristics, such as breast development and in regulating the menstrual cycle. Oestrogen also has several other actions in various metabolic processes including maintaining bone mass and lipid (fat) metabolism. Because the oestradiol in Climara 50 enters your blood directly and continuously, it is not metabolised (broken down) by the liver, as happens when you take oral oestrogen tablets, which means that Climara 50 patches are effective at a lower dose and provide more even blood levels similar to the natural release of oestrogen by the ovaries.

There are no reviews yet.

Be the first to review “Climara 50 (Estradiol)” Cancel reply 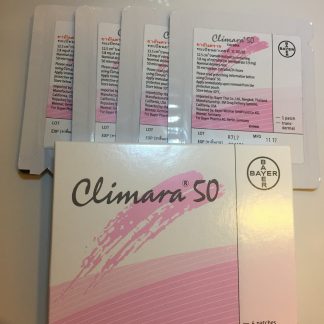